With the initiative and support of Embassy of Azerbaijan in Lithuania, in the constitution hall of Lithuanian Parliament (Seimas) had been organized an event dedicated to the January tragedies of Baku and Vilnius to hallow the memories of victims. This event has proved another existing similarity between two friend countries, now, the history bounds us too. In fact, on 20th of January 1990, and the 13th of January in 1991, happened same tragic events in Baku and Vilnius, with only one year of difference. There had been placed stands with photos, materials and historical publication in the lobby of the Parliament. Separately, there had been shown photo exhibition and short movies from both countries had been presented to the attending guests.

In this memorable event, many important guests took part, including vice-deputy of the President of Parliament, Parliament members, member of European Parliament, first President of independent Lithuania –  Vytautas Landsbergis, current ministers, social and political activists, famous politicians, historians, and clerics, as well as Azerbaijani students living in Lithuanian and activists from AYOL.

According to the words of member of European Parliament and first President of the Lithuanian Republic, January events in Baku and Vilnius, were a thoughtful and intentional aggression acts. Those unprecedented events cause mass destruction and ended many lives, of civilians and children. But the heroic struggle for independence and freedom united Azerbaijani and Lithuanian people and strengthened the bounds between two countries. He also mentioned the geopolitical strength of Azerbaijan as a powerful country and emphasized that its connection with the Islamic and Christian world, tolerates this as an example.

With 1 minute silence, participants of the event remembered victims that sacrificed themselves for the independent future of these nations. 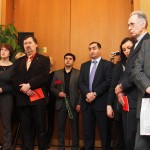 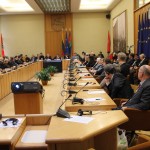 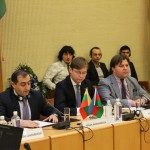 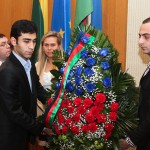 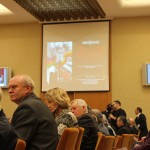