28 May – Republic Day of Azerbaijan

The first secular republic in the Muslim East is today marking its 98th anniversary. 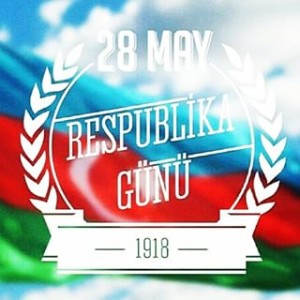 Today, 28 May, Azerbaijan is marking one of the most striking and significant days in its history – the creation of the Azerbaijan Democratic Republic – ADR (Azərbaycan Xalq Cumhuriyyəti), which was the first secular republic in the Muslim East.

The Azerbaijani intellectuals took an active part in democratic reforms and civil rights struggle that unfolded in the early 20th century in the Russian Empire. The bourgeois revolution that took place in February 1917 gave rise to attempts to create Transcaucasian Federative Republic, which included the peoples of the South Caucasus.

But hard socio-political situation and the World War I postponed the idea of federation and at initiative of the Georgians it was decided to dissolve the Transcaucasian Sejm (Parliament) at the meeting of the in Tbilisi on 26 May, 1918. Georgia declared its independence on the same day.

Mammadamin Rasulzade’s words “The flag raised once will never be lowered” made ​​history.

As Baku was under control of Baku Commune, Ganja was announced the capital city of ADR. The Azerbaijani government moved from Tbilisi to Ganja on 16 June, 1918.

The first ADR cabinet was headed by Fatali Khan Khoyski, graduate of the Law Faculty of Moscow State University and a former deputy of the State Duma. The ADR government also included generals from the imperial army artillery, legendary Samad bey Mehmandarov and Ali Aga Shikhlinski who were charged with issues of army formation and protection of ADR independence.

On 4 June 1918, Turkey and Azerbaijan Democratic Republic signed a peace and friendship contract. Azerbaijani was announced state language of ADR on 27 June 1918.  The armed forces of the Baku Soviet Bolsheviks began an offensive on Ganja on 12 June 1918. The Azerbaijani government was forced to seek military aid from Turkey. The combined Turkish-Azerbaijani troops defeated the army of the Bolsheviks in Goychay. On 15 September, 1918 the Turkish-Azerbaijani Army entered Baku. Baku was declared the capital of the ADR.

The parliament, originally composed of 97 members, opened on 7 December 1918. The Speaker of the parliament was Alimardan bay Topchubashov with Hasanbay Agayev being Deputy Speaker. On 11 January, 1920 the Supreme Council of the Allied Powers – the winners in the World War I, unanimously decided to recognize de facto independence of Azerbaijan.

But dark clouds were gathering more and more over young Republic of Azerbaijan. Strategically important geographical location and oil resources of Baku became the main target of Soviet Russia in the Transcaucasus direction. In mid-April 1920, the Red Army defeated the remnants of Denikin’s army and reaching the northern border of Azerbaijan, began the occupation of Azerbaijan on 28 April.

Despite a short life of 23 months, ADR became a great school for democratic Azerbaijani intellectuals around the world. After the collapse of the Soviet Union, Azerbaijan regained its independence, declaring himself the heir of ADR in 1991 and restored the attributes of the ADR – the flag, emblem and anthem.

The Azerbaijan Democratic Republic, established in 1918, is our national treasure, the brightest page in the history of Azerbaijan. And the next years and decades are significant stages in the life of the country which are marked by vivid events, great achievements of the Azerbaijani people. That’s all taken together created economic, intellectual and cultural potential of the current independent Azerbaijan.

Establishment and activities of the Democratic Republic showed the world the independence of Azerbaijan, realization of dreams of freedom of Azerbaijani people who cherish their statehood.